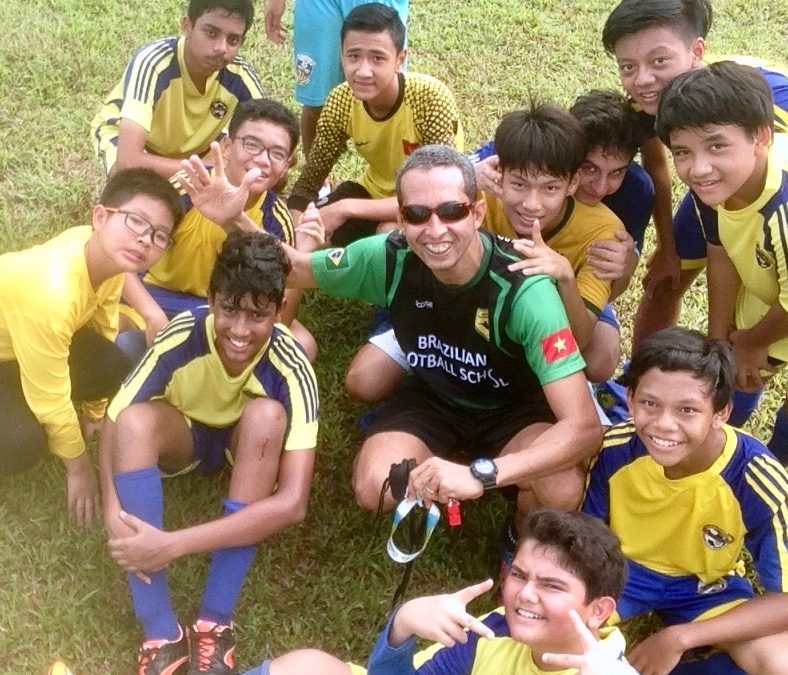 “I’m often asked about my life and how I got into soccer. It is a dream of almost all Brazilian children to become professional soccer players.

I was born into a large family of six siblings. My father often brought us, his three sons to the stadium on Sunday evenings to support the local team, Centro Sportivo Alagoano or CSA.

In Brazil, soccer is a lot like a religion that is practised everywhere from the streets to the bush or the beach. If our friends were there, the soccer ball would be too.

Going to the stadium was like going to a party, a family highlight accompanied by intensely felt emotions when our team won or lost. We learned some life lessons, including how to control our feelings when we lost!

As I kept playing soccer with my friends, eventually I had opportunities to join tournaments in my hometown and I started to be known as a good goalkeeper.

Suddenly I started receiving invitations from schools to play in their teams. I will always be thankful to my parents who made the difficult decision of encouraging me to pursue my sport despite the uncertainties of a soccer career.

But soccer gave me new opportunities, including a scholarship to a private school, which was very helpful as my parents were poor.

While I enjoyed my education, the sponsorship came with a lot of responsibilities. There were tournaments that involved travel and training. Soccer clubs also began sending me invitations to play for them and the doors started to open for me to play professionally.

I remember my friends making me feel so happy with their support as the opportunities came, and it didn’t take long for me to realise that through soccer I could also do something for others.

In 2001 I stopped playing as a professional and enrolled in university to become a physical trainer. When I graduated I responded to an invitation to go to South Africa to work with war refugees and when I got there, I immediately felt at home because Africans love playing soccer.

Then one day a friend introduced to me to an orphanage where I ended up working with HIV children. I felt blessed with the opportunity to learn with them, and it was there that I understood what powerful skills I had gained in my hands to help and inspire them, and for them to inspire me too.

Today I am a coach at HASA. This spectacular program is growing every day and I am privileged to be a part of developing a bright future for all students involved. I have seen soccer help change the lives of young people. I can’t wait to see the stories of HASA students unfold.”

This blog post is contributed by Coach Joaquim
Joaquim’s career has seen him play for several Brazilian clubs including Corinthians Alagoano, Bom Jesus and Dinamo. In more recent years he has coached at the Brazil International Football Academy in Gurgaon, India, worked with the Ambassadors Football Program in Drakentein Prison in Wellington, South Africa, and been a youth leader for war refugees in Cape Town, South Africa. He is a professor of physical education and a licensed coach with All India Football Federation.