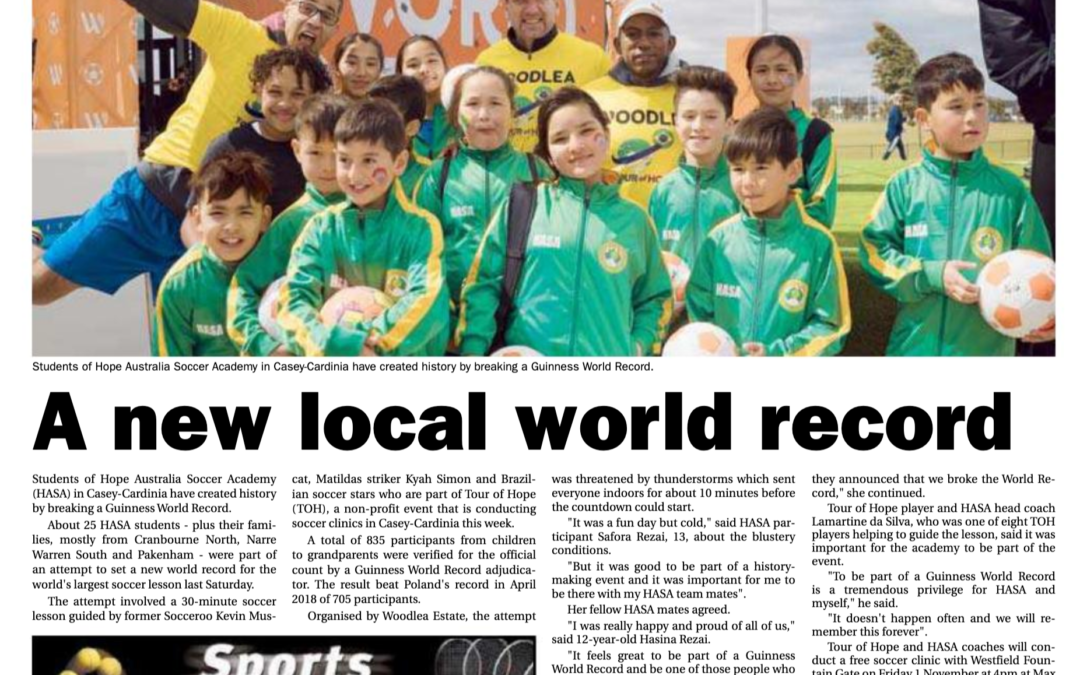 What HUGE boxes HASA has ticked off!

HASA students helped break Poland’s record of 705 participants for the world’s largest soccer lesson. Organised by Woodlea, our shared attempt on 26 October 2019 had 835 participants on a day threatened by thunderstorms. The New World Record was confirmed by an official Guinness World Record adjudicator who pronounced us all officially amazing. A big thanks to everyone who helped with car spaces so HASA students could be part of this history-making event : )

Here’s a snapshot of HASA in the media in recent weeks: SBS Portuguese broadcast the attempt and achievement live on their social media networks, interviewing Tour of Hope and HASA’s soccer players and Assistant Minister for Multicultural Affairs Jason Wood. Featuring on SBS was a great highlight for HASA students.

Here are the main links to SBS Portuguese’s coverage:
Interview with Tour of Hope and HASA coaches before the attempt (in Portuguese!):
http://bit.ly/SBSPortFBGWRTOH

Interview with Jason Wood MP, with Tour of Hope and HASA students
http://bit.ly/SBSPortFBGWRJasonWoodHASA

Also we were proud to be featured on ABC Australia’s The World program, where Tour of Hope’s Paulo Sergio and Luiz Felipe spoke about winning the World Record, Tour of Hope’s work with migrant and refugee kids, and the launch of HASA. ABC Australia (international) is broadcast in 40 countries in Asia-Pacific. The interview was also broadcast locally on ABC News 24. Finally, our World Record achievement was also featured in three Casey-Cardinia newspapers, with a few of our students quoted. How awesome is that! Once again, we thank everyone for showing up!!